Ukrainian families who have been forced to flee their war-torn country have spoken warmly about the reception and support they’ve received at a Wandsworth primary school.

In an interview with Schools Week magazine two families have praised pupils and staff at Riversdale Primary School in Southfields for their kindness and compassion in helping them adjust to new surroundings after the trauma they experienced as a result of Russia’s invasion.

According to Schools. Week, “Five year old Mykita cowers when he hears planes flying over London, fearing they are about to drop missiles. His classmate Polina mistakes police sirens for the dreaded air raid alarms. Both are scarred by the war they fled in Ukraine.

“The heart wrenching stories of the children taken in by England’s schools reveal the horror of Putin’s war: Fleeing Russian bombs with all their worldly goods in one suitcase; forced to leave their fathers behind; one child’s school has even been reduced to rubble.

“But by opening their doors to refugees, schools are helping to write a new chapter in the story. One full of love, compassion and hope instead.

“The Balabanova family have had to rebuild their lives before having fled Donetsk in 2014 at the start of the Donbas war. Then on February 24 this year, two hours after Russia invaded, the family of four crammed their car full of belongings and left Kyiv to drive west. They arrived in London two months later after finding a sponsor family….but five-year-old Polina is still confused when police cars go by sirens blaring, scared it is the sound of the air raid sirens heard across Ukraine since Russia invaded. 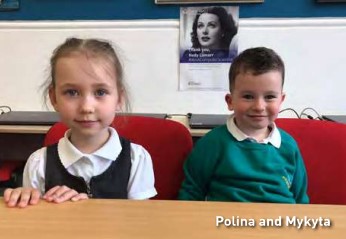 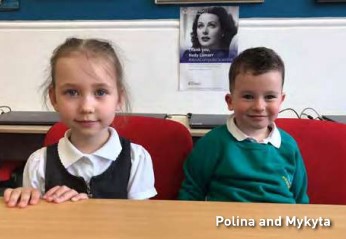 “Both youngsters started at Riversdale – which has pupils who speak 42 different languages – just a day after visiting. According to headteacher Amy Roberts, ‘Mykyta loved his new school jumper so much he wouldn’t take it off. It’s a privilege to have people who trust us to look after their children. On that first day the parents’ courage to walk away from their children was amazing’.

“At Riversdale the children will be offered ‘play therapy’ by in-house therapists when ready, where they can re-enact any trauma and explore their feelings. “Teachers are used to helping those who have English as a second language so use ‘clear messaging’ and lots of visual techniques,” Roberts said.”

The support offered by Riversdale has been replicated across the borough with other schools and the town hall offering a far-reaching package of support to newly arrived refugees fleeing Ukraine.

There are now 41 Ukrainian refugee children who have been offered places at Wandsworth primary schools and ten at a borough secondary school.

For these children and other young arrivals from Ukraine, resources have been produced to support and assist their teachers, including advice and suggestions on how to welcome and support Ukrainian children and young people, encouraging teachers to consider their cultural, linguistic and academic needs and how they can help the settling in process.

A resource has also been produced for the parents/carers of Ukrainian children with details on how they can prepare their child or young person for school and what to expect. A table detailing the main similarities and differences of the Ukrainian and UK education systems provides a helpful comparison. These resources are translated into Ukrainian to further support the settling in of children and families to life in Wandsworth.

And in order to ensure the accommodation being offered to Ukrainian families is of a safe and decent standard, the council has been carrying out a series of inspections to ensure these standards are reached.

The council is working with charities and the boroughs voluntary sector network to provide additional training for staff welcoming refugees and to ensure that opportunities to access advice, welfare services and form local support networks are maximised.

Wandsworth Council’s cabinet member for children Cllr Kate Stock said: “I am proud that Wandsworth is offering sanctuary to so many Ukrainian families with children. We must ensure that those fleeing this terrible war receive the utmost care and support as they settle in to their new surroundings.

“People in the borough have come forward in large numbers to offer homes to refugees from Ukraine. Their generosity and compassion is recognised by all in our community.

“As a council we are committed to providing all the support we can to families in desperate need of our help. Wandsworth will offer a warm welcome to refugees.”

For more information about how Wandsworth residents can help support people from Ukraine, please visit the council’s website.