Residents offered free grit to use if cold snap arrives

Wandsworth residents are once again being offered free bags of grit and rock salt as part of the town hall’s annual winter initiative to tackle snow and ice. 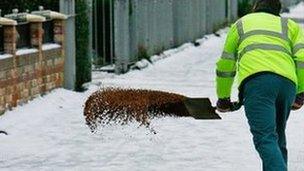 Although Londoners have enjoyed a prolonged spell of mild weather in recent weeks, temperatures will undoubtedly fall over the winter months and so the council is once more offering borough residents up to 50 kilos of grit free-of-charge to help them clear frozen footpaths.

Last year around 20 tonnes of grit was given to residents, community groups and neighbourhood watch co-ordinators.

When temperatures plummet and roads and footpaths are covered in snow and ice the council’s fleet of gritting vehicles and dozens of staff are dispatched to clear it away, but with nearly 230 miles of road surface and 450 miles of pavements it is a mammoth task that always takes time to complete.

And to make the gritting of roads and pavements work effectively it needs repeated treatments – especially if temperatures drop further or there is another flurry of snow.

When there is a cold and icy snap local people often contact the town hall to volunteer to clear paths in their neighbourhoods, which is why free grit is being offered to residents.

Local people also have much better knowledge of their neighbourhoods and are better placed to clear ice from the front garden paths of vulnerable or elderly people living close by.”

They will need to bring some proof of address to show they live in the borough. The depot’s postcode is SW18 1EY for people using sat-navs.

The council is also supplying sacks of grit to Wandsworth’s 200 neighbourhood watch co-ordinators and filling up grit bins across the borough so that local people have an immediate stock close at hand.

There are now 55 of these bins located around the borough, situated mainly in hilly areas where icy pavements can be particularly treacherous.

When snow has fallen, the priority is to keep the borough’s main roads clear of ice so that the emergency services and public transport can keep running. Particular attention is always paid to entrances at tube and rail stations, hospitals, day centres, schools, care homes, clinics and nurseries.

To find the location of your nearest salt bin visit www.wandsworth.gov.uk/snow. For more information about the free grit offer call (020) 8871 6750.