Local people are invited to attend a town hall meeting next week where they will be able to raise issues of concern and ask questions about the borough’s future priorities for tackling crime and anti-social behaviour. 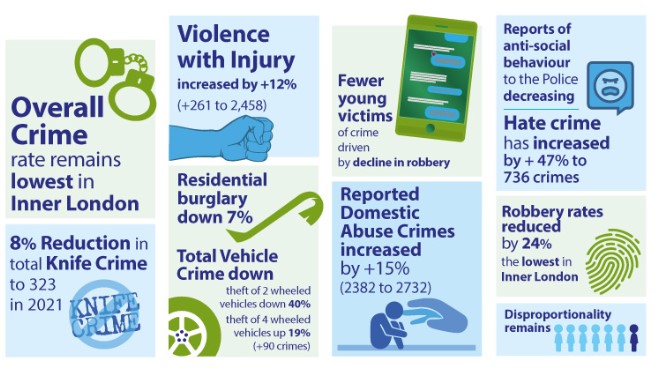 The borough’s Safer Neighbourhood Board is meeting in the council chamber at 6.30pm on Tuesday, October 11 and the main item up for discussion will be the borough’s new Community Safety Strategy which is currently being devised.

The strategy is being drawn up by the Wandsworth Community Safety Partnership, which includes the police, council, fire brigade and other public bodies. It’s important that the new strategy reflects the views and priorities of local residents and businesses when it comes to setting out the borough’s priorities for tackling crime and anti-social behaviour.

At Tuesday’s meeting people will be able to highlight their priorities and ask questions about how the police and other public agencies plan to tackle crime.

The meeting will help ensure that those in charge of crime prevention in the borough are aware of the community’s priorities and concerns.

The community safety partnership has just launched a public consultation which will be used to help set future targets and priorities. These are likely to include:

• Ensuring neighbourhoods are safe by tackling crime and anti-social behaviour including burglary and motor vehicle crime as well as violent crime such as robbery and knife crime.

• Preventing violence against women and girls.

Wandsworth’s cabinet member for health Cllr Graeme Henderson, who is also the borough’s lead spokesperson on community safety, said: “We want to hear from all people who live, study, work, run a business, or visit the borough. We also want to hear from our partners as well as community and voluntary organisations so that we can make sure the strategy meets their needs.

“Listening to the views and concerns of communities is important in ensuring that we get it right and address the issues and concerns which have the most impact on our residents and businesses.

“The partnership has certainly seen some notable successes in tackling the types of crime that most concern the public, but we must not be complacent and must continue our efforts to drive down offending and tackle all crime types.”

The most recent crime figures show:

• The total crime rate in Wandsworth remains the lowest in inner London.

• Robberies/muggings have reduced by 24 per cent since 2017 and is at the lowest level in inner London.

• There has been an eight per cent reduction in knife crime since 2017.

• There have been fewer young victims of crime. Younger people aged between ten and 17 who are victims of robbery is down 53 per cent since 2019.

• There has been a reduction of seven per cent in residential burglaries since 2017.

• Reports of anti-social behaviour to the police are decreasing.

• There has been a 40 per cent reduction in theft of two-wheeled vehicles over the last two years.

• From 2020 onwards non-residential burglaries have increased by 31 per cent while thefts of four wheeled vehicles have risen 19 per cent.

• Eleven per cent of recorded crime in 2021 was domestic abuse and it’s widely recognised this type of crime remains under-reported.

• Violent crime is a longer-term trend which has increased by 12 per cent but Wandsworth is still the second safest Inner London borough.

To take part in the consultation please visit the council’s website.

For further information, or to request a questionnaire in an alternative format, please email consult@wandsworth.gov.uk or call (020) 8891 7777.

The Wandsworth Community Safety Partnership brings together Wandsworth Council, the Metropolitan Police, London Fire Brigade, NHS partners, the criminal justice system including the Probation Service as well as community and voluntary sector organisations involved with crime reduction and community safety in the borough.