Families with young children living in Tooting will soon be able to enjoy brand new play equipment that’s being installed in a local neighbourhood green space that’s being opened up to the public for extended periods over the summer. 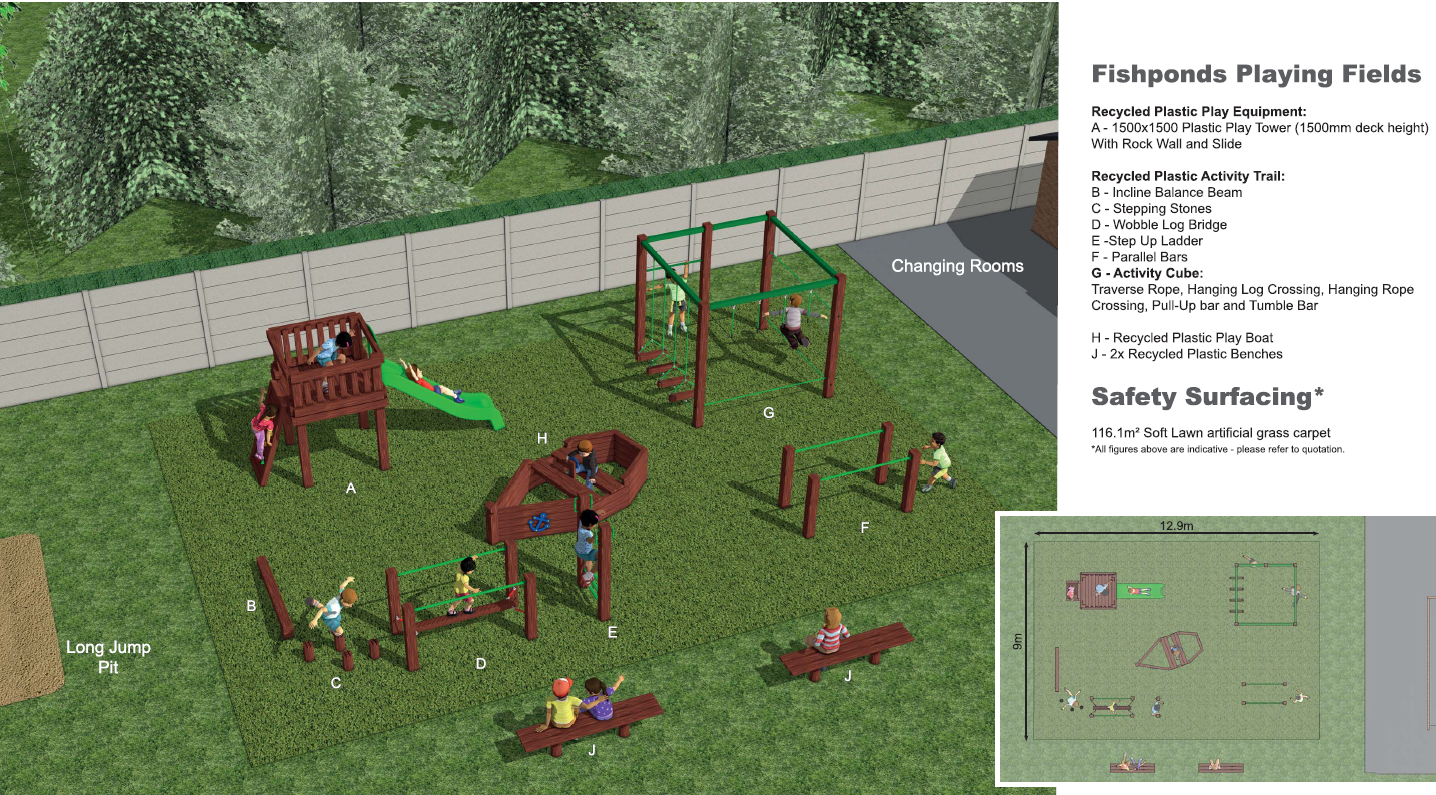 Work is scheduled to begin this week on a £38,000 project to provide new play equipment for younger children at Fishponds playing fields.

The equipment will have a natural look and is being made out of recycled plastics. It will include a climbing tower with slide, a play boat and an activity trail with a ‘wobble log’ bridge, stepping stones, parallel bars and a balance beam.

It is being sited in a part of the playing fields away from the existing sports pitches which will remain available for use by local schools and sports clubs.

And following consultation with local residents, the playing fields will now be kept open for longer for the duration of the summer so that the local community can enjoy this neighbourhood open space.

Previously the gates to the playing fields – which are bordered by Fishponds Road, Hebdon Road and Broadwater Road - were only unlocked to accommodate sports clubs that had booked pitches there.

Now, until September 1, the fields will be open between 9am and 4pm every weekday and at weekends, apart from Wednesdays when the opening hours will be 9am to 1pm.

The gates will remain locked at other times. People are also being advised that dogs are not permitted on the playing fields at any time.

Parks and open spaces spokesman Cllr Steffi Sutters said: “This is an important but underused green amenity space that should be of great benefit to young families in this part of Tooting.

“I’m delighted we are installing children’s play equipment there and especially thrilled it’s being manufactured from recycled plastic. I’m sure it will prove popular with local people, who will be able to enjoy this open amenity space for extended periods throughout the summer months.”

The improvements at Fishponds are just the latest in a long list of neighbourhood projects funded by the Wandsworth Local Fund (WLF). This fund holds cash levied by the council on new developments in the area which help pay for community infrastructure improvements across the borough.

Recently the all-weather ball games area in Chivalry Road was refurbished as part of a £130,000 scheme. As well as a new playing surface, fencing and renewed sports equipment, the floodlighting was also upgraded enabling young people to use it after dusk.

And several other playgrounds across the borough have already been or are about to be revamped, including Upper Tooting Park, Godley Gardens, Swaby Gardens, Leaders Gardens and Battersea Park. Improvements are also being made at Fred Wells Gardens, Falcon Park and Furzedown Rec.

Over the past three years more than £7.2m in WLF money has been spent on local improvement initiatives including schemes to support safer communities, employment opportunities for young people, better pavements and improved playgrounds.

Those chosen for funding are mainly suggested by local residents who are encouraged to bring their ideas to their local ward councillors so they can be properly considered. Funding is only approved for schemes that meet criteria based on the priorities set by local people.

A new guide has been published offering local people advice on how they can nominate community schemes for funding. It’s available at all local libraries or can be read online at www.wandsworth.gov.uk/WLF.