The average council tax bill in Wandsworth is set to remain one of the lowest in the country.

The Finance and Corporate Resources Committee has supported the recommendations in the annual budget setting report, including vital additional funding for social care.

The report will now be considered at the next Council meeting on March 6 where the Council will be asked to consider a council tax increase of 2.99 per cent, plus a further 2 per cent targeted for social care.

This means an average extra charge of £21.38 a year, with Wandsworth residents still continuing to benefit from one of the lowest council tax bills in the country.

In contrast, the Mayor of London, Sadiq Khan, is proposing to increase his share of council tax by 8.9 per cent (compared with the council increase of 4.99 per cent), meaning his precept will rise by £26.28 a year.

This takes Wandsworth’s overall average Band D council tax bill for the entire year to £770.31 - of which £320.51 is payable to the Mayor.

However, this overall Wandsworth total is still expected to be around half the London average. 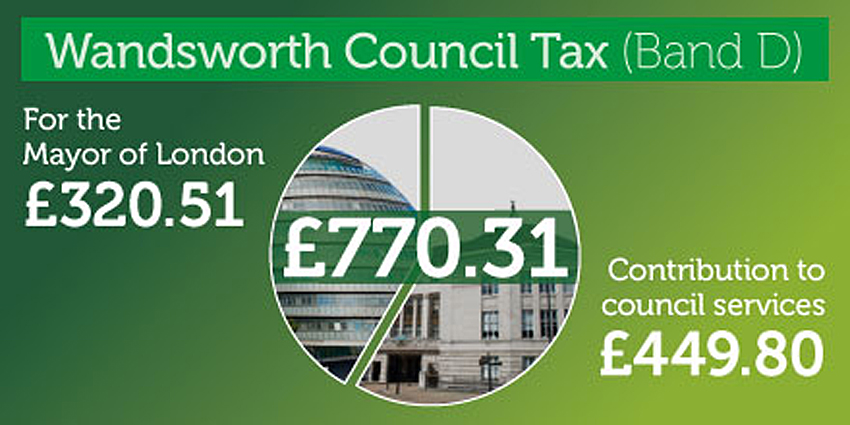 “For decades we have worked hard to make sure that our residents have paid one of the lowest council taxes in London and yet benefited from record investment in roads, libraries and housing” said Councillor Guy Senior, Cabinet member for Finance and Corporate Resources.

“We have managed to keep Council Tax low and at the same time deliver some of the best-run local government services in the country.

“We pledge to continue to offer our residents fantastic services and value for money.

“We are also making sure we protect the vital social care services that many of our elderly residents, or those who are sick or vulnerable, rely on so heavily.

“This increase also supports our local carers who are important to our communities. We want to make a real difference to the quality of life for our residents and those people who need a bit of extra support.”

The report also shows that the council benefited from a record £12.932 million new homes bonus payment in 2018/19 in reward for supporting new housing delivery in the borough. And this funding is expected to go up to £12.953 million in 2019/20 – the second highest in the country.

Cllr Senior added: “This money is a result of Wandsworth’s strong record on delivering new homes and another example of how we are working hard to keep Council Tax low.”