Although there was considerable angst over the eventual costs of the Gardens, they were a great popular success during the Festival summer. Over eight million people were admitted instead of the six million originally estimated.

The legacy of the funfair was something that London children enjoyed for several decades and you can still many traces of the Festival Gardens in Battersea Park today.

Location: Near to Bandstand in Battersea Park , SW11. 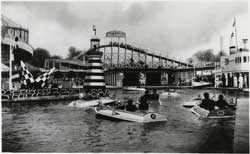